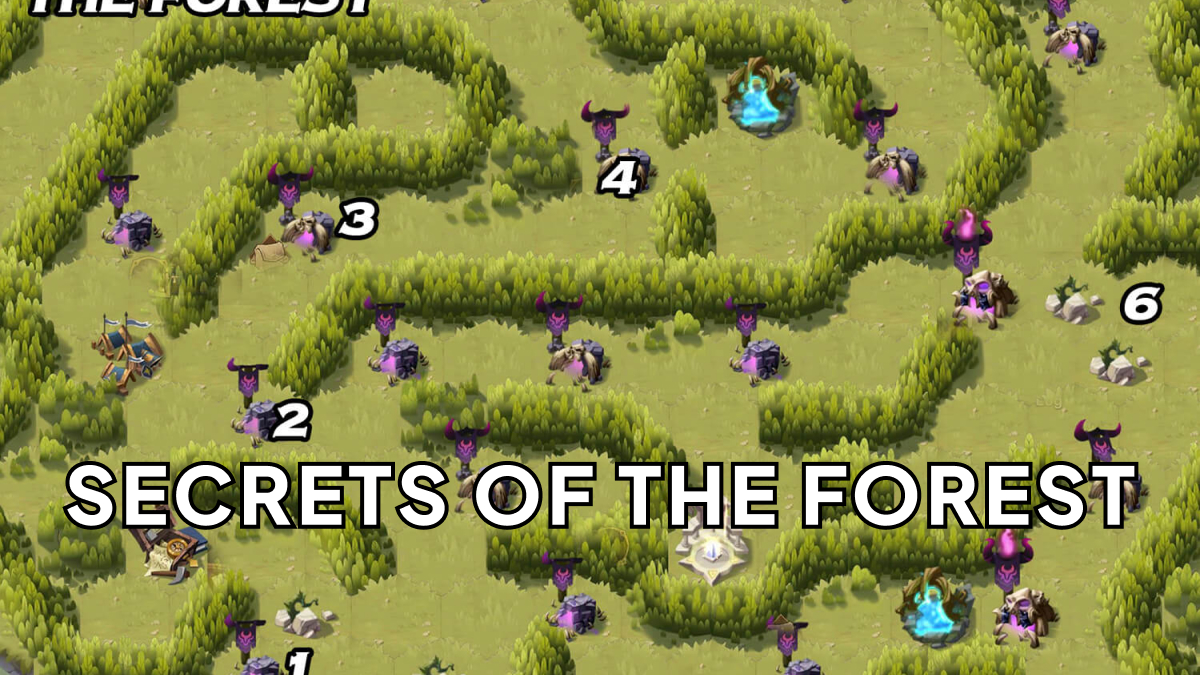 AFK Arena: Secrets of the Forest

The third mission of the Peaks of Time, Secrets of the Forest is a straightforward mission with a complicated route to 100%.

Each time the player engages in combat within the Secrets of the Forest mission, vines around the map grow to block off certain chests as players fight, meaning that players cannot simply take every fight in a random order. To get access to one of the main chests, players must fight the units directly to the right of the starting point, and continue down that pathway.

For players who don’t have the firepower to rush that side of the map without collecting relics from earlier battles, there is a way to cheese the vines that will be outlined below.

Getting the last chest:

In the Secrets of the Forest mission, there is a single chest that is blocked off by the very beginning in the upper left-hand corner. At mission start there is no way to access that chest. It can only be accessed by interacting with the Tome and then defeating the Trials of the Forest with 3 or more Wilder heroes in the winning team. Once players have defeated that group, they will let them through the ‘secret passage’ that leads to the last chest on the map.

The Trials of the Forest mission is either difficult or laughably easy depending on the units the player has found / ascended on their account. Players that have a core Wilder lineup (such as Arden, Nemora, Lyca, Tasi and Eironn) will easily dispatch with the trial and access the last chest, for players who have focused on another faction, it can be quite difficult.

Strategies for Defeating the Trial of the Forest

The Mercenary Encampments spread around the map during the Secrets of the Forest mission have a chance to contain Wilder units that players can use to bolster their teams. These encampments offer heroes that scale with the player’s most powerful heroes, and they can be checked as soon as the mission starts. Restarting the Secrets of the Forest mission repeatedly until the Mercenary Encampments both have powerful Wilder units is a good way to ensure that the player only needs to have 1 decent Wilder for their lineup.

This means that players can throw multiple teams of non-wilder but weaker units at the Trial of the Forest to lower their health before fighting them with their Wilder team.  This makes the fight much easier, but it’s critical to remember that there is still one more ‘Chief Enemies’ between players and the last chest, so players cannot use ALL of their good units trying to weaken, but not kill, the trial.

In the early game, when players are attempting to defeat the Secret Forest for the first time, they are unlikely to have the powerful sustain tools that lategame players have to keep their units healthy, because of this many of the relics that heal, or prevent damage to, players units are the strongest choices.

When it doubt, it’s always good to acquire relics that empower Wilders to assist with the Trail of the Forest.

The Sun and Moon stone are almost unbeatable early in the game if players can get access to them together as most low-level enemy teams cannot out damage their sustain. Beyond that the Firebringer and Icebringer weapons are incredible assets that don’t stop damage, but turn everything but the first seconds of every fight into a laughably easy encounter.

Though the Rare Relics are rarely worth mentioning, players that feel lucky can aim for the Shards of Force. If they are able to acquire more than 2 it will be a huge boon to their team.

Cheesing the vines and avoiding the time limit on the Secrets of the Forest map involves taking a direct path to the Mercenaries at the top of the map. There are five battles between the player’s starting position and the Mercenaries. Defeating all five of these battles will stop the vines from continuing to grow and there will be no paths blocked. It’s unknown if this is an intentional feature added by the developers or a bug.