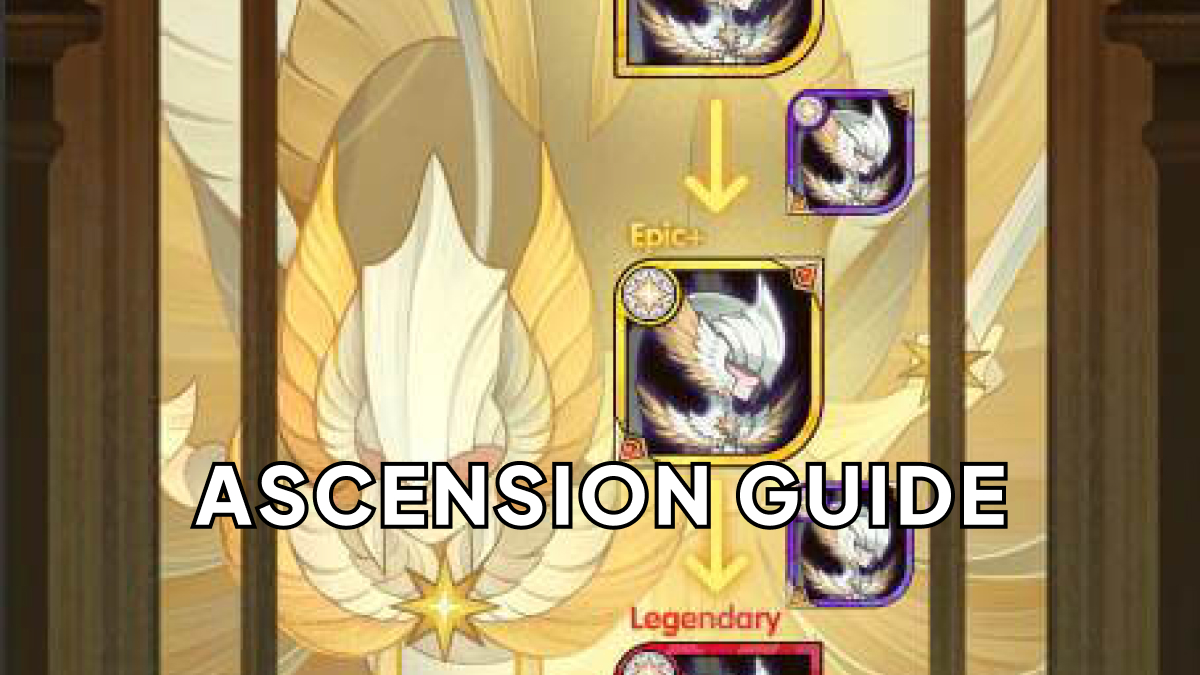 Welcome to Tierlist.gg’s AFK Arena Ascension Guide. Whether you’re just starting your journey in AFK Arena, or you’ve been battling the hypogean forces for a long time, this guide is here to explain ascension and ensure you’re progressing the best way possible.

This is a daunting number, but the interesting thing is that it’s actually the optimal way to ascend heroes. It’s worth noting that deviating from the strategies laid out below will ensure that you need a lot more than 28 heroes to make your first Ascended Tier hero.

Finally, it’s important to remember that Ascended heroes are a late-game target. Realistically it will take players a long while to get their first Ascended Tier Hero and that’s okay. You can get very far in the game without having a single Ascended Tier Hero in your roster.

The Early Game: Rares and Fodder

During your early time in AFK Area you’re going to have a glut of Rare heroes (the heroes that you draw as blue cards.) These rare heroes are your main source of fodder for ascension at all points in the game. 3 copies of the same rare hero can be combined at the Temple of Ascension to make a single Rare + hero. 3 Rare + heroes of the same faction can be combined to make a single elite tier version of a hero. Each of those elite tier heroes can act as 1 of the 28 elite tier heroes that need to be sacrificed to reach ascended tier. Keep in mind, these cannot replace the copies of the hero you’re trying to ascend. When ascending Belinda in the example above we needed at least 8 copies of her.

When it comes to rare heroes and using them as fodder for ascension, you will need use them as both sacrifices at the legendary + tier and sometimes ascended the rare heroes all the way to Elite + in order to sacrifice them.

Because of how this structure works (With the game requiring 2 copies of the same elite + hero to ascend to legendary +. It’s often worth it to wait until you have 4 elite + heroes, two of which are the same, before ascending to legendary. This will ensure you don’t have legendary heroes sitting and waiting for you to draw more copies of that hero so you can attain legendary +.

One exception to this rule is the extremely early game. During the early game you will want to ascend what units you can as soon as you can while never using Ascended Heroes as fodder. As you progress in AFK Arena, rare units become extremely easy to get (With many Free to Play users getting 5+ a day late game with barely any effort). This means that it’s often worth it to put extra power into a unit early so that you can progress further as it will increase your resource gathering speed.

In the early game, when levelling up your rare heroes, it’s critical to pay attention to Seveas, Arden and Silvina. All three of these units are potent and much more powerful than the other rare heroes that are in the game. They are often times better members of a composition than Ascended heroes of the same level.

The lightbearers faction doesn’t have a powerhouse like Seveas, Arden and Silvina, but the strongest of the rare units in that faction is Mireal. Given the chance she is a powerful unit to upgrade, but she is not nearly as critical to early game progression as any of the other three.

As you move through the mid game of AFK arena the core limiting factor to progression and ascension becomes a mix of needing copies of Ascended Heroes and Heroes Essence to raise hero’s level.

An important decision to make at this point in the game is to decide if you’re willing to wait to maximize overall progression speed. As mentioned above, progression is faster if you wait till the optimal time, to ascend heroes, but sometimes it can be difficult to look at a possible ascension and choose to not take advantage of it.

The main reason for this is that you only need 4 copies of a hero to ascend them to mythic+ the rest of the progression can and should be handled by fodder heroes like Angelo. This means that the limit on how far you can ascend a hero is heavily determined by acquiring those 4 cards. Considering most heroes in the game aren’t guaranteed to drop in any circumstance, using fodder to ascend a unit that you have less than 4 copies of is risky, as you can end up having a unit stuck at the Elite tier for a long time while you wait for other copies of them to drop.

Exceptions to this rule are, Estrilda, Nemora, Khasos, Shemira, Skreg, Thoran, Raine, Ghrezul, Fawkes, Belinda, Antandra, Eironn, Baden, Rosaline, Werek, Soren, Isabella and Flora. All of those heroes are available through the Labyrinth shop or Challenger Shops, meaning you can know that you’ll get at least one copy of the them per month.

Note: The heroes to pay attention to within the Shop, especially in the mid game, are Shemira, Belinda, Eironn and Rosaline. They are fantastic heroes that will jumpstart your progress in the game and be strong later as well.

As we mentioned above, whether you follow this tip towards being patient is completely up to you, but as you look to gain for first ascended heroes being patient and ensuring that you have the correct heroes to get to mythic is a huge time saver.

Even assuming a very generous 1 rare hero of each faction a day, an elite +  fodder hero would take 18 days of straight play to create. This means ascending a hero to legendary is 36 days of progress. Committing 36 days of progress without knowing that you will be able to get the hero past legendary is a huge gamble for your progression.

Luckily, the creators of AFK Arena, Lilith are quite generous with events, so you can often acquire the heroes you need in less than 36 days if you participate.

As you reach later in the game it’s critical to start recognizing where your weaknesses lie within your composition, and start directly attempting to fill those holes. Due to this, traditional ascension becomes much less critical.

Once you have your first ascended heroes and are waiting for part of a team that you’d like to use, the best thing to do is to completely stop ascending heroes (outside of your core lineup,) until you have 4 copies of the unit you’re looking to ascend next.

Unlike the early-mid game, not all heroes are viable, and ascending heroes that will never be part of your lineup is a waste of precious resources. This should only be done casually once you have lineups for each faction that can be used in the faction towers.

This is also the part of the game where the Celestial units begin being a priority, as you no longer need a glut of units to sacrifice in the temple of ascension. Celestial and Hypogean units have different ascension requirements from the rest of the units in the game.

Unlike the other units in the game, Celestials and Hypogeans can only be ascended with copies of themselves, but it requires less units overall.

Ascending a Celestial hero to the Ascended tier only requires 14 legendary cards, but all of them must be the same unit. Due to this and the general rarity of Celestial units, they are nearly impossible to max out for Free to Play players.

If a player is looking to ascend a celestial unit, one of the best options is Athalia as she is available in the challenger store. Additionally, players can make any celestial unit their target in the Stargazer and move their diamond spending over to the Stargazer as opposed to summoning more heroes.

Using the Stargazer as opposed to summoning more heroes will greatly slow players progress when it comes to ascending non-celestial units as they will no longer have access to legions of rare heroes to use as fodder. As such this focus on Stargazing to ascend celestials should only begin once a core lineup that can aggressively push in the game has been achieved. For example, this should not be done before a player has properly ascended several units per standard faction.

Once a unit has reached the ascended tier they can have ‘stars’ added to their ranking by using two copies of the hero. The maximum ranking is Ascended Tier +5 Stars, or a full ascended hero with 10 extra copies of that hero invested.

Star Rankings are much less significant in terms of power compared to the other forms of ascension. Additionally, additional stars added to a unit don’t empower the Resonating Crystal or the Elder Tree. The lack of benefit from adding stars to a unit means that units that can be ‘bought’ on a consistent basis stop being as worth it once they have reached the ascended tier.

For example, Belinda, Ghrezul, Fawkes, Eironn and Rosaline are all powerful high-tier units that are available in the Challenger Store. If a player ascends Belinda to the Ascended tier, they should begin purchasing other units with their challenger coins. Notably players can also purchase Athalia with their challenger coins, though she is significantly more expensive than the other units in the store and should only be a consideration if they are planning to use her in their core lineup.

Players debate as to whether units that have already reached Ascended Tier should be left on a players Wishlist, thus ensuring that they will get extra copies that they can invest in adding stars over time. The same issues that were mentioned above apply to leaving heroes on your Wishlist, but seeing as players are required to have 5 units on their wishlist, it’s typically safe to leave a unit that has reached Ascended Tier on the hero wishlist as any other hero you added wouldn’t be part of the core lineup.

The only exception is if the player is having issues with the level cap, at which point units that have already been ascended should be swapped out of the wishlist to make room for other units that players can ascend and raise their level cap. This should rarely be an issue for free to play players.